Joint Research under one Roof

The time has finally come: it is May 2022 and our employees have moved into the new building. The offices are gradually being occupied and the move is for the most part completed. Some of the laboratories and their infrastructure have been in operation for a while and have already passed the practical test.

Now a new work routine is emerging at the institute, where everyone is working together under one roof for the first time and the previous different Fraunhofer IEE locations are being united. The combination of desk sharing and remote work from the home office will allow the 450 employees to work together flexibly and efficiently, sharing the 320 workstations in the new building.

The inauguration of the building is scheduled for fall 2022. A second building is currently being planned.

Directions to the new Building

A new Research and Development
Environment

Next to Kassel's main train station, the Fraunhofer-Gesellschaft is building a new research and development environment for around 320 employees of the Fraunhofer Institute for Energy Economics and Energy Systems Technology IEE. The investment volume of around 60 million euros is being financed in equal parts by the German Federal Ministry of Education and Research (BMBF) and the State of Hesse.

The groundbreaking ceremony in September 2017 marked the official start of the new construction and the premises were initially examined for soil contamination such as remnants of war. The company commissioned with this unexpectedly went bankrupt in the summer of 2018. Due to the need to re-award the contract, there was a shutdown until September 2018. These delays and the Covid pandemic have delayed the completion of the building and the start of operations until early 2022.

In order to provide Fraunhofer with sufficient space for further expansion of the institute, the city of Kassel has developed the former customs site north of the main train station as a construction area.

The new building, designed by architect Günter Schleiff of HHS Planer und Architekten in Kassel, is oriented towards the future in terms of design, building physics and energy, and is intended to promote more direct communication and coordination and collaboration between the scientists.

In addition to offices and seminar rooms, the 4-story building with a usable floor space of around 7,600 square meters will house a large technical center and several specialized laboratories.

Pictures of the Construction

Expand all Close all

The central platform offers the possibility to gather information about upcoming award procedures and pre-publications and to electronically participate. 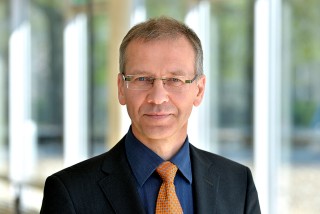